As always 25% of profits go towards the TI 10 prize pool, while the rest will go to Valve who have already given 1.6 million USD for the initial prize pool.

Community functions such as tips, high-fiving, consumable items, and chat wheel sounds all return. There is also a new and yet-to-be-named game mode that will be available to everyone. DOTA 2 Battle pass owners will be getting additional prizes from playing. 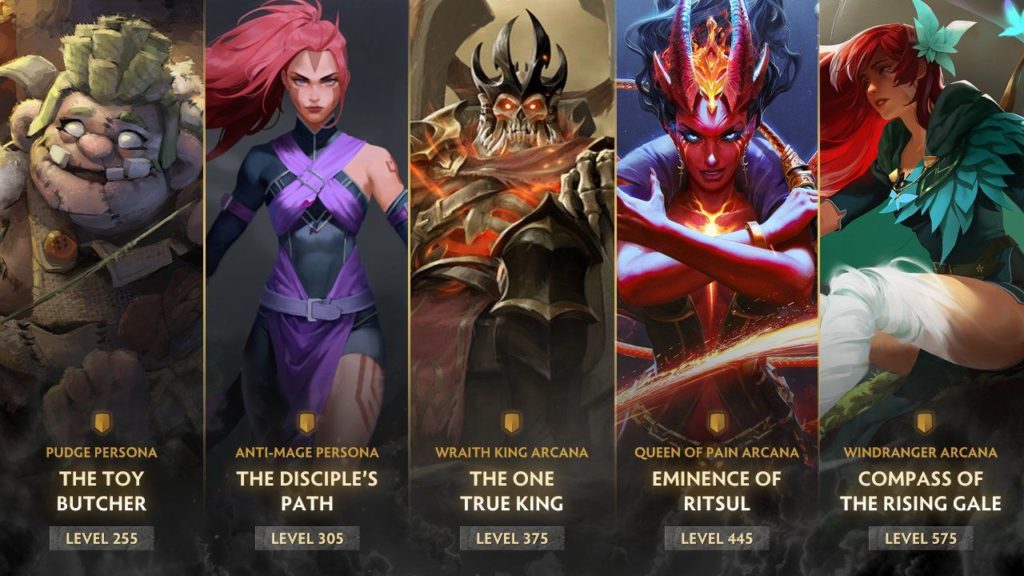 This year Valve has decided to give us a lot of very special cosmetics exclusive to the TI 10 Battle Pass. The International 10 Music Pack is available at Lvl 1, i.e. to everyone that takes part in the battle pass fun. Lvl 1 also grants the new Courier Brightskye as well as Custom wards Faithful Followers. Those interested in warding should check out our guides on warding.A welcome return to past traditions is also the new Kill Streak Effect. It comes in different versions including Ice (Lvl 1), Fire (Lvl 285), and Gold (Lvl 765).

The first of many major visual overhauls comes with the Lvl 160 Custom terrain Sanctums of the Divine with matching Custom towers at Lvl 200. The new terrain and towers match this year’s theme of Nightsilver, where the goddess Selemene reigns. Lore fans may notice the connections to Luna as well as Mirana.

Lvl 255 holds the new (yet unreleased) Pudge Persona cosmetic The Toy Butcher. A persona for the most played hero in the history of DotA isn’t shocking, but it does come after the hero has seen some major nerfs to his kit. Hopefully the hero gets some buffs soon to accompany the release of the new Persona cosmetic. From the art it looks like Pudge is getting the same treatment as Invoker, making his model smaller with a childish twist.

Lvl 305 comes with a completely unexpected Anti-mage persona named The Disciple’s path. Swapping the well known Magina for Wei, his disciple in the way of fighting mages. Lore fans may rejoice as Wei’s description references the Tyler Estate, an organization that hunts down rouge magic users such as Dark Willow.  Fans are going crazy over the new Wei Persona have started posting fan-art at astonishing speeds.

Lvl 375 had many fans thinking this was a out-of-season April’s fools joke, as the One true King returns to the game. After nearly 7 years since he was removed for Pressing ceremonial reasons. A new Arcana for Wraith King that restores him to his past glory as the Skeleton King. The Arcana comes with 2 selectable styles, and over 400 new Voice lines. 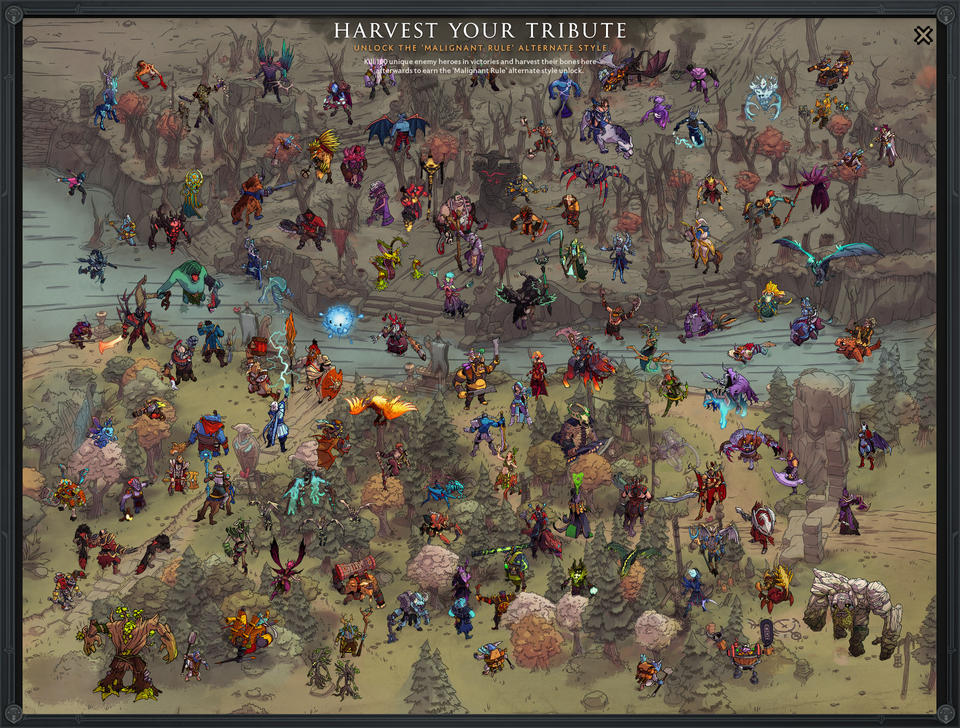 Lvl 445 bring a new Arcana for Queen of Pain. She has seen an increase in poppularity recently meaning we will be seeing a lot of her in the following months, be it pubs and Pro matches as well.

Lvl 575 has made SirActionSlacks mad all over Twitter. The one hero he despises the most. Last year’s runner-up in the Arcana vote has now gotten an Arcana of her own. Compass of the Rising Gale brings a new improved take on Windranger’s model, hopefully, this time with no scoliosis. 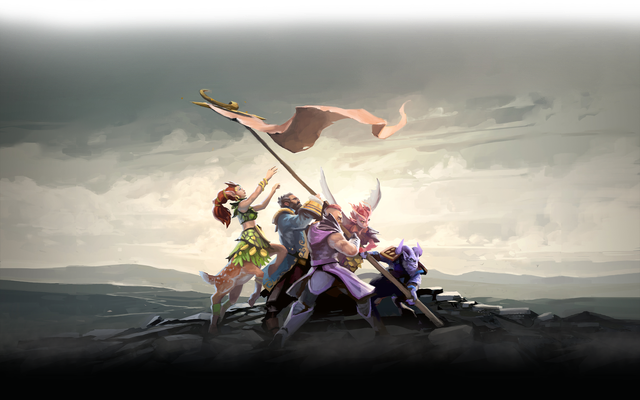 The return of Guilds

After being gone since the Reborn update, Guild’s have finally come back. This time a player can be part of only one guild at a time, but this time there is Guild content for players to go through. Each guild has it’s own progression system in order to unlock more guild quests (Contracts) as well as customisation for the Guild banner which can be shown off during matches.

By completing Contracts which are refreshed daily, one helps raise his Guild’s level as well as raises their own Battle pass level. Each player can have up to 3 contracts active per day, while guilds also have a separate group of weekly quests for which all players share progress. 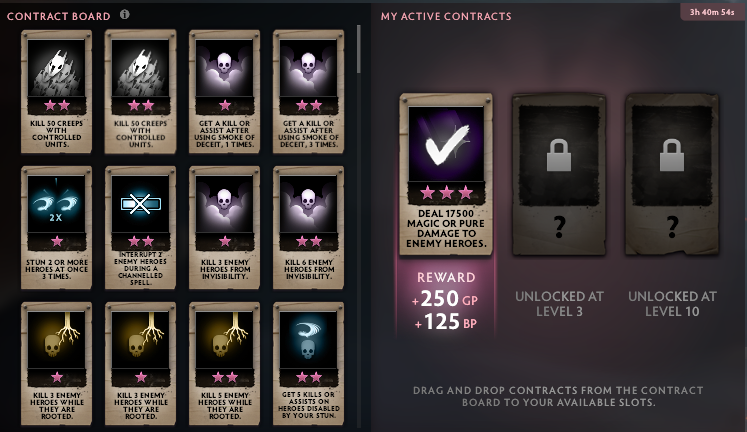 Members of a guild also have a special chat feature integrated into steam chat itself. Thus, you don’t need to be inside the game client to talk to guild mates.

When playing with 3 or more guild mates all the team banners will be replaced with your guild’s banners. Also, when playing with friends you gain progress towards completing Guild challenges that give a large boost towards Guild progress.

How much does the Battle Pass cost?

The basic Lvl 1 costs $9.99 USD and offers a lot by itself. The base version gives you The International 10 Music pack. Composer Gareth Coker has done amazing fork on it. He has already done amazing works for games such as Ori and the Blind forest as well as some Minecraft tunes.

From there on till Lvl 575 one may spend as much as $200 USD if aiming for the Windrunner Arcana, or $375 USD for Lvl 1000 to obtain the miniature replica of the Aegis of Champions. Those with enough disposable income to aim for Lvl 2000 and the Roshan figurine will have to shed out close to $800 USD!

Luckily, there are a few ways to level up the Battle Pass without spending money.

This year players will gather a lot of points by taking part in guild activities, playing the summer event and clearing one’s Cavern crawl. Since the actual tournament has been delayed until further notice, a lot of points that were obtainable in previous years, such as group and main stage predictions are unavailable.

This year’s Cavern Crawl consists of 2 maps for players to explore. Nightsilver is the 1st map. Players can unlock the 3 exclusive cosmetic sets for Slark, Spirit Breaker and Nyx Assassin. Foulfell is the 2nd map, unlocked by finding 3 keys. By going through Foulfell players can obtain 6 extra equipment style unlocks (2 styles for each set). 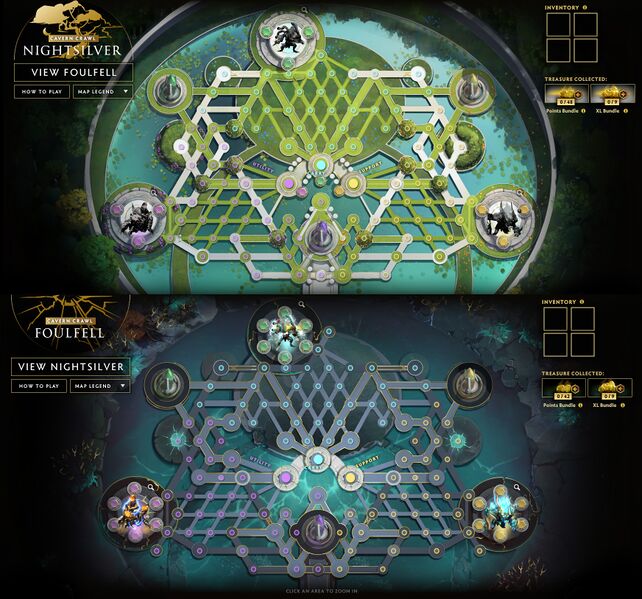 After each game won with a designated hero from the Cavern Crawl players will unlock a new room. Each room holds either a consumable item to be used in the Cavern crawl, or Battle Points to level your Battle Pass. There are 42 Small Treasures containing 250 Battle points (as well as 125 Shards for DOTA+ subscribers), and 9 Large Treasures worth 2000 Battle points (and 1000 Shards).

Therefore by just clearing the Cavern Crawl players can look forward to getting ~40 levels.

By reaching the two goals (which has become standard practice at this point) players will get 20 levels.

By doing the 3 star contracts as often as possible, you will earn around 13-16 levels. This depends on the difficulty you manage to complete as well as the Guild level. Leveling your guild is an important part of this year’s Battle Pass. 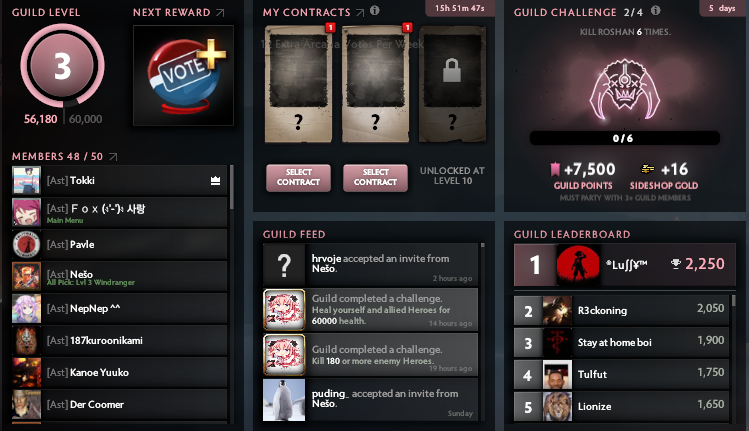 By queuing with friends and exchanging tips with them you can easily get 4-5 levels or 7-8 if you bought the lvl 100 bundle.

By completing the more realistic achievements one can gain around 25 levels. Achievement such as collecting all Tier 4 and 5 heroes in the sideshop are just unrealistic considering their rarity.

It hasn’t been revealed yet, but going by previous years we can safely assume players will be able to earn at least 10 levels. 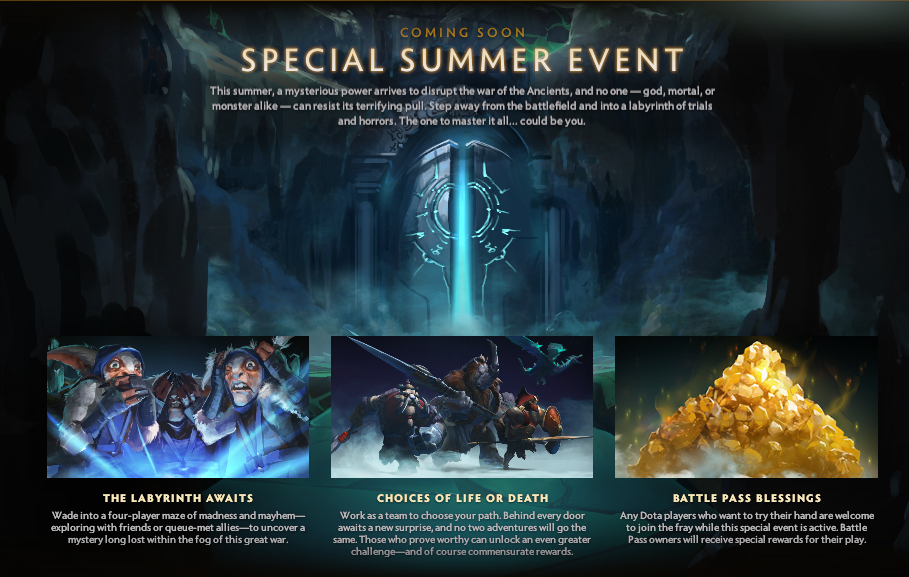 By swapping bounties with a friend you can easily gain 6-8 levels. 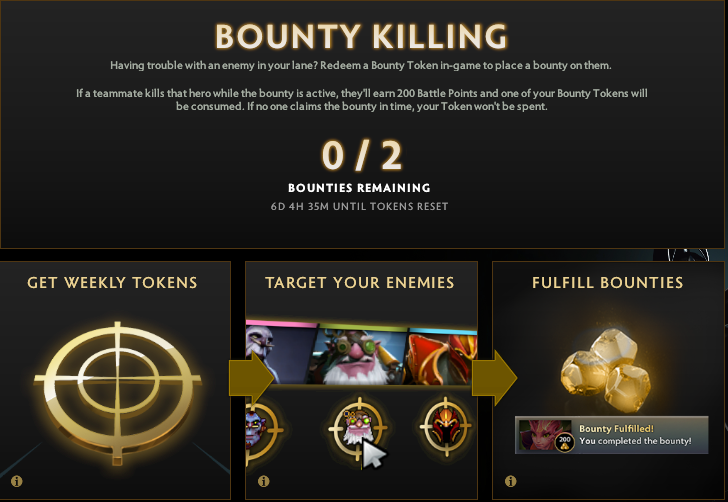 While Portals have a low chance of giving Battle Pass points, throughout the season you may get lucky and end up with 5-10 levels.

This year the system has changed. Instead of getting 1000 points to wager every week, players will have 10 tokens and be able to bet a maximum of 3 tokens per match. Each token has a base value of 40, but each consecutive successful wager will increase it’s worth. If you play your cards right, you may get around 20 levels or more from it. 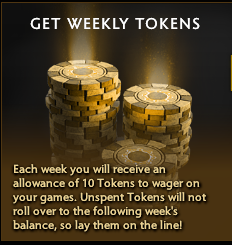 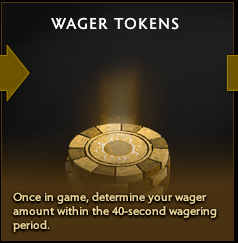 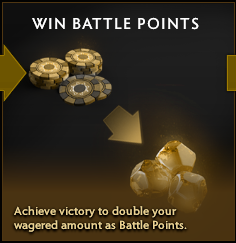 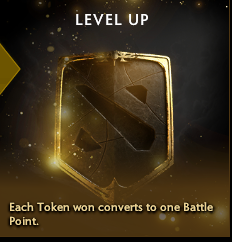 Every win is 1.5 Levels but the difficulty does increase. Considering everyone starts with 5 tickets it’s better  to spend gems on the Consumable bundle. Players are likely to end up with 1-3 levels from Gauntlet. 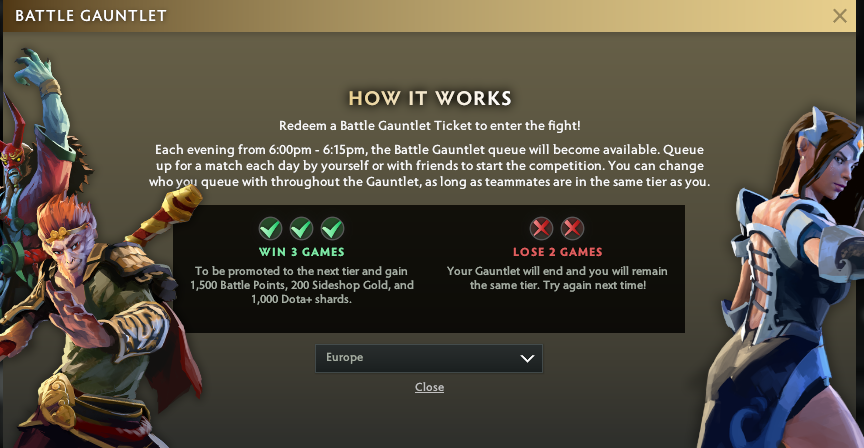 In conclusion players may see themselves getting around 100 free levels. Playing with friends and completing contracts is very important. Thus, players that purchased the base edition will be close to this year’s terrain, while players with the Lvl 100 bundle will obtain the Pudge Persona. Higher rewards have to be purchased with more levels.

Players can buy heroes  with Sideshop Gold. Leveling the DOTA 2 Battle Pass, earning Guild rewards, or recycling items are all good ways of gaining Gold. The system is similar to that used in the spin-off title DOTA Underlords as well as other auto-battlers. Heroes can be sold for

Blue Gems, which are used to buy items and rewards from the Sideshop.

Once you have amassed enough gems they can be exchanged for prizes. Bundles of consumable items, equipment sets, treasures or even a random Arcana item. Unless you have a huge amount of gold at your disposal, it’s better to go for 1-3 star heroes. The 4 and 5 star are extremely rare and getting 9 of them is extremely unlikely. A good rule of thumb is “if you have enough gold to get 35

Blue Gems, it would have been cheaper to just buy the Arcana instead”. Especially since the price of Arcana’s has dropped on the Steam market as people are trying to get money to purchase more Battle Pass levels.

With the new changes, guild’s and a summer event soon being added, as well as the upcoming MMR reset this is a great time to get back into the game and play with some friends. While there sadly isn’t a TI on the horizon, there is plenty of high level DOTA to watch with many tournaments being held online.